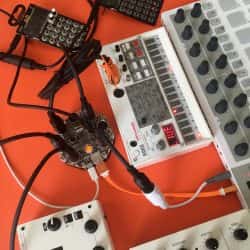 Posted by By Grit

Watch Sonicstate’s Nick and Gaz having a ball with the RK-002 (2016)
Mind you the RK-002 now is shipped with a new orange plug end as opposed to the version in the video. Also we have increased the length to 1.5m and the RK-002 is able to run custom firmware for multitude of other MIDI devices.

The RK-002 ‘Smart MIDI cable’ has already found it’s way in various setups, not just for the volca Sample. It looks like a +/-1.5m ordinary  male-male MIDI-cable but has a microprocessor on board which ‘bends’ midi data on the fly.

Initially developed to solve the KORG volca Sample’s MIDI behaviour but in the meantime various other firmware flavours have come to life:

And some with a bit more experimental nature:

The RK002 firmware is updatable via MIDI, you can implement the RK-002’s sysex messages in e.g. a MIDI controller or visit the firmware parameter-settings pages. Firmware update can also be done from the browser via the DUY Exchange Portal.

To keep things portable and solderless we decided to make the RK-002 MIDI-Powered. This means the embedded controller is powered by the MIDI bus and you don’t need an extra power supply. Beware though: Although power consumption is very, very low: Not every MIDI interface or device supports MIDI power! In order to make the RK-002 work in these cases there are multiple options, but if you want to work with what you have at hand; Sometimes looping the RK-002 through another synthesizer’s MIDI-In -> MIDI-Thru port can solve the problem. Our RK-006 USB MIDI Interface / Standalone USB Host also does the trick.

You can drive the RK-002 via our RK-004 when you set the MIDI port to ‘out mode’. Added bonus on the RK-004 is that you can update the firmware via an audio signal, e.g. people who use the RK-002 with the BeatStep Pro (which filters out our firmware SysEx messages) can now update their RK-002 via a plain and simple MP3 file.

Note that you can upload other firmware flavours to our RK-002 but here’s short summary of the Volca Sample firmware’s possibilities (v51+):

Here is a short overview of the RK-002 Play modes on the preloaded volca sample firmware:
By default there are two ‘hot areas’ on your keyboard:
C3-A3: 10 Sample triggers
Last triggered sample sets that specific sample under pitch control area at note C4 and up. You can change this behaviour via:

*as of firmware v50: Polyphonic play
11..19 : singlechannel / trigger area + polymux chromatic.
11..19 defines how many poly channels to use:
so let’s say you have 4 channels in the polyphonic group (Program Change=14), that means you have channel 1-4 are bundled as a 4-voice polyphonic sample player. The volca sample channel 5-10 are left for normal triggering via it’s sequencer for example, allowing you to play chords while you have a rhythm going on the internal sequencer.

Note that the RK002 uses the available MIDI implementation of the volca Sample to make these extras possible. For example: it uses the part level, EG-control and pitch amount to emulate note velocity and a chromatic scale. The volca Sample’s pitch tuning however is not 100% chromatic and can deviate a bit at some notes.

as of version 58
Easy MIDI configuration! Start your synth and keep the key pressed on which you want to set the sample trigger basechannel. Plug the RK-002 and release the key within three seconds. Don’t press anything else or the RK-002 will not be reconfigured.

In order to do this, first the RK-002 must be unplugged/unpowered*.
Steps:

After release, the midi channel and trigger basekey are set and saved to the RK-002 settings.

* Keep in mind that the RK-002 still runs a while on internal power after you have unplugged it. To drain the power from the RK-002, shorten the three middle pins on the black end with a piece of metal – the tip of a jack plug for example.

ON-LINE SETTINGS
If you are using Google Chrome (or have the jazz-plugin enabled on other browsers which don’t support webMIDI) you can also reconfigure the RK-002 cable here:
retrokits.com/rk002/settings/kvs/
If you want to change the firmware, the old updater is here (chrome preferred):
retrokits.com/rk002/updater/

This updater is 1-way meaning you only have to connect the black end of the RK-002 to the MIDI OUT port of your MIDI Interface. The downside of this is that you are not actually seeing if the update has any effect. For that, use the 2-way connection (orange end of the RK-002 back into the MIDI-IN port of your interface) and go to the RK002/DUY Exchange Portal

Changing the MIDI response channel can be done without a computer, watch this video to see the startup procedure which allows you to change the basekey and MIDI channel. If you prefer a program like midi-ox (PC) or sysex librarian (MAC) to update (in case of sysex librarian; don’t forget to add a 150/200mS pause between sysex packages in the settings) you can download the firmware from the settings page mentioned above.
Note: The same which counts for normal usage of the cable: You need a MIDI-interface with midi power – and MIDI SystemExclusive message support – to do an update.

If the browser acts up with the plugin you can find a .zip file on the bottom of that page and some suggestions of PC/Mac software to upload the sysex file to the RK-002.

An extra note about MIDI power:
An easy test to see if the cable gets power is to feed the MIDI stream with a tempo/clock signal. The volca will start/stop with the tempo, indicating that the cable is working.

If you have no response whatsoever with the cable (and the volca does react to tempo with a normal MIDI cable) it probably means the midi sender you use does not have MIDI power.

A MIDI thru box (like our RK-004) can solve that, but you can also try and inject power to the RK-002 by using it via another synth or synth-module’s thru port like this: 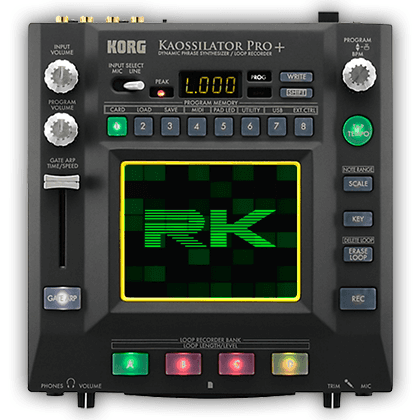 With the change of EU VAT regulations in July 2021 we now show prices without VAT. VAT Calculation varies per country and is added on checkout.

We just need cookies. If you continue to use this site we will assume that you are happy with it. Click here if you want to see the GDPR stuff.Ok